One of the reasons why I’ve been spending so much time on Gitcoin is that there is a lot of room for growth here. And this second infographic, which is slightly more complicated, explains the concept further. 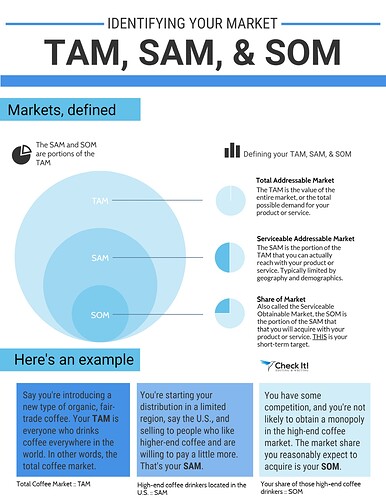 How big is the market size for an web3 identity aggregator?

How big is the market size for an web3 capital allocation stack?

As you can see from this post, I am bullish on GTC doing token swaps (what you call Mutual Grants) with up and coming VC projects.

What insights can we derive from this information?

Gitcoin’s Growth will be an S-Curve

Many of the graphs in the GTC Financial Model are quite naive because they show an exponential growth (J curve) growth.

In reality, Gitcoin’s growth will be limited by it’s TAM, SAM, and SOM. 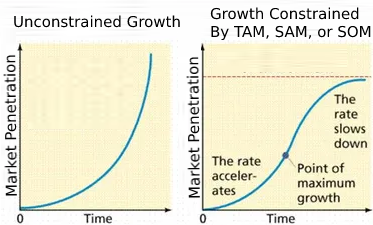 Gitcoin’s current traction is ~ 1/1000th of it’s SOM in almost all of the market segments that it is in. That makes me really excited about room for growth.

There is massive room for growth in this market! All that remains between current traction + the SOM is execution and network effects!

A rising tide lifts all boats. The nice thing about Gitcoin is that it’s being lifted by the rising tide of Ethereum’s growth. We can expect that Gitcoin’s SAM/SOM will continue to grow as long as the EVM continues to gets adopted.

This is a great article. Thanks for sharing. We do have a lot of work to do to make this happen. I did an internal poll to get range estimates of what we might expect from protocol fees and services based on growth rate. I’m hoping we finish the model this week and I’ll put up a nice forecasting post to break it down next week.

Here are the live results: Mentimeter

Here are a few more details about what we are doing: [Discussion] Gitcoin 2023 - Future Essential Intents and Organization - #7 by DisruptionJoe

A great eye opener. Excellent one. Keep up the good work.