Whats up with Gitcoin Quests?

During Q1 2022, I was active in dCompass project. You may remember dCompass as a Gitcoin funded initiative to revamp Quests and decentralize them. We had several discussions there with me volunteering and pushing for a more humane interface for our end users in a way that they feel both home(privacy & ease of use) and learn something while using our tools. I wrote a short review on what I “thought” was wrong with Quests’ software and later drafting another one as a vision for the whole project. I met and worked with many like-minded people there but unfortunately the bear market hit and project ran out of money. I have not been here for several months focusing on my own stuff… . So, what’s up with Quests? who’s doing what? any updates appreciated.

The dCompass team seems to have stopped development.

Yes, I know they have stopped working, was wondering what’s going on with quests post dCompass-stop.

Here’s an insight on what we’ve achieved, what went wrong and what the future holds for dCompass.

What did we achieve ?

We did a first lauch of https://alpha.dcompass.xyz on the Rinkeby testnet and posted it on product hunt as well as on our social medias.
Unfortunately we didn’t get any feedback, perhaps due to the lack of content, incentive to test the product and maybe lack of interest from the web3 curious people due to the market conditions.

So we decided to build https://dcompass.quest which is a simplified, permissionless version and we launched it on mainnet.
That launch received more feedback than the first one but still didn’t get enough users to go through the first quest and to create new quests.
Due to the lack of traction and funding our team stopped the development of dCompass.

One of our biggest mistakes was the will to spin up our own workstream and DAO later on.
The development velocity went down as soon as we started creating meetings, project planning and opening the workstream to anyone willing to contribute.
This led to the arrival of new contributors who had no significant tasks to perform outside of development and quest creation. It was a bad onboarding experience for them and a waste of time for us.
I think that we would have done a better job if we were 3 devs guided by a product owner from Gitcoin and a good designer like Will.

This leads to the second mistake, which I’m responsible for.
I overcommitted and thought I could do it all: project management, product ownership and development at the same time. Not to mention other projects I was contributing to as a dev at the beginning (stopped as soon as I realized couldn’t handle that much workload).

The third factor of our failure was bad market conditions and the impact that it had on our core contributors.
Core dev n°1: lost his life savings on Anchor protocol (Terra/LUNA collapse) which affected his productivity for some time.
Core dev n°2: husband and father of 3 children, left the team for a stable source of income
Core dev n°3: was frustrated by the lack of traction and kind of burned out

What does the future holds for dCompass ?

In a few words, it will become a side project with volunteer contributors.

A bit more context:
My mental health was pretty bad and I took a few months to recover.
I’m in a way better state since November so I started applying for a new job.
I got hired by a great open source protocol and I’ll start on January 2nd.

I’m sure that I can still do something to revive dCompass and make it a successful project so I’ll do my best to contribute during my free time.

I think that’s not a bad thing because contributors willing to help will not be motivated by financial incentives. Our only motivation will be to build and ship a product because we believe that Web3 needs more educational resources as well as a project registry that adventurers can use to navigate safely.

Without promising anything, if we’re able to get the product in a better state I think that it should be launched under the Gitcoin flag, if the Gitcoin community feels like it.

Last but not least I’d like to say sorry to the community for not getting the product where we wanted.
If you have any advice, reactions or feedback I’m open to it.

This led to the arrival of new contributors who had no significant tasks to perform outside of development and quest creation. It was a bad onboarding experience for them and a waste of time for us.
I think that we would have done a better job if we were 3 devs guided by a product owner from Gitcoin and a good designer like Will.

Wow,
If I was not welcomed there, you could have simply asked me to leave. I was volunteering and literally spent > 70% of my time in spring 2022 on dCompass and now this is the response I get? Did you know that, as an example, I manually tried every single quest on Gitcoin website just to provide you better insights on what we are dealing with.
I’m feeling very sorry for myself and this is not what I expected to hear someday.

Sorry if I wasn’t clear enough on the statement you quoted or maybe you misunderstood.
What I said there is that people willing to contribute to anything other than development and quest creation were not really able to help.

Your contributions were very helpful because you were working on quest creation and that had a significant impact, but for people outside of that scope (which is not your case) it was more difficult for them to find their place.

Thank you for this difficult but helpful retrospective. I appreciate all the effort, ingenuity and passion you have provided!

Hey Huxwell, thanks for this writeup, and sorry to hear you went through such a tough time, I can only echo what Joe said.
So much respect for all you did. I don’t think apologies are needed, the circumstances were clearly very challenging. I hope DCompass indeed lives on as a sideproject, after all the energy you poured in. And congratulations on the new job!

I think that’s not a bad thing because contributors willing to help will not be motivated by financial incentives.

First of all, thanks for the write up. It feels so much better reading that there are no financially safe crypto space where people are doing things that inspire others. The validation that there nothing wrong with me feeling so financially insecure in the open source and crypto scene.

Second, I think the financial part of the Gitcoin projects are extremely important. Even if we don’t want it to be the incentive, the amount of money each of us needs weekly to survive is an essential measurement. The measurement that answers questions - how much the project needs, how many days it will be able to operate, what is the project onboarding capacity for experienced contributors (money for one day for one person)?

I don’t think it is possible to get all calculations open and transparent from the first try, but maybe from 15th iteration we will know how much of the gas that people need, needs to be fueled into each project to take it further another mile.

Speaking about Gitcoin, financial incentives and another mile for Quests 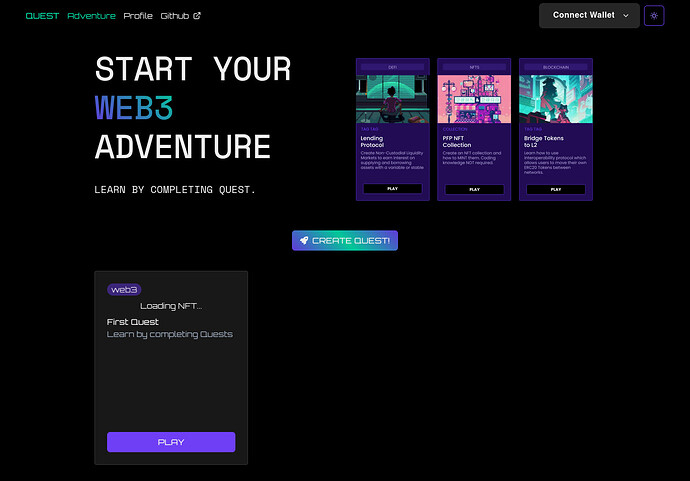 The widgets at the top right are not clickable. So the only actionable content is this “Loading NFT…” box and “Create Quest!” button, none of which are particularly inviting. But… The design is great. I mean the design is so great that it sets high expectations.

How this can be useful in future?

Doesn’t the interface remind you of the Gitcoin Grants itself? Or Kickstarter page? Or like any page with the progress bar of raised funds with a funding goal? An incremental game? An IDLE RPG?

Well, I think that the potential in the Gitcoin Quests is the ability to eat its own dogfood fund its own Quest progress. Where each widget is a donation widget that unlocks further development with guaranteed and wishful deliverables. While it may unlock education content from time to time, the end result of funding is the Quest platform itself. But it is not just the platform, it is the full data about cost, deliverables, contributors, design assets.

That, I think, is necessary to make Gitcoin Quests really a dQuest platform.