The primary user persona for fraud defense tools is the “Fraud Consultant”. This is a person who understands the past sybil attacks and steps taken to mitigate them. They are not only able to consult program & round operators, but also other uses of Passport, Project, and Program protocols.

The second user persona for fraud defense tools is the “Round Operator”. Most likely this will be someone on the Gitcoin PGF workstream team for early rounds. Their primary interest is maintaining a happy community where funders and donors both feel that capital is optimally distributed in their program (or at least as close as possible).

The “round operator” is the persona of someone focused on a single instance of a grant round voting event. The term “program operator” is referring to the operator of multiple rounds for the same program. Imagine Uniswap hosts 4 rounds per year. The program operator and round operator are likely, but not necessarily the same person. “Event operator” further abstracts this role to include events which are not Gitcoin Grants related such as a vote on snapshot (which has integrated Passport).

This discussion will focus on the Fraud Consultant (FC) user persona. There are four likely tools in the FC toolbag. 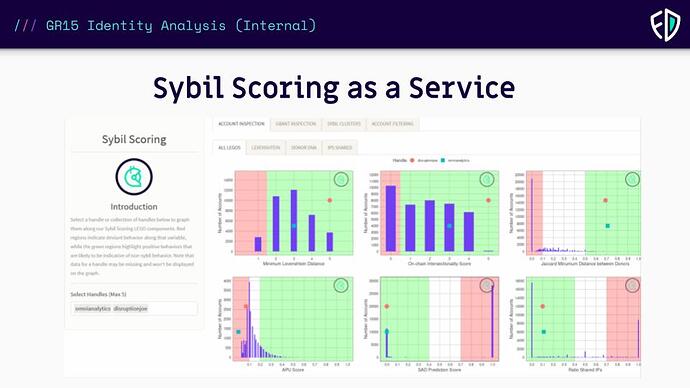 Each of these application will use open source modules, “legos”, to consistently retrieve, aggregate, and compute useful signals for fraud defense techniques to be applied to grants rounds.

While Passport Scoring as a Service will work for many use cases, it will not be enough for communities with high value decisions and/or those who wish to maximally empower voters. One score for all communities will always be subject to type 1 & type 2 errors. Because no single analysis will tell us if users are sybil or not, we will need to customize scoring for each program for the best protection possible.

What are these Legos?

Each Lego is an analysis which is validated to be correlated to an account being sybil. Analysts decide what the threshold is for this signal to be enough to count. The Levenstein distance is good one to share as it is not longer in use with the switch to the protocol. Notice how we set a threshold to determine a boolean output.

Some of the legos are for analysis. Some extract data directly from RPCs or a subgraph. Others clean or wrangle data. In all, these legos are crowdsourced and strengthened by the Open Data Community. The secret sauce lies in how we use them to build customize fraud mitigation for each program and event.

The primary reason for needing these Legos as middleware for the fraud defense applications is that fraud defense is an iterative game. Once a behavior is detected and mitigated, the fraudsters find a new loophole. The legos allow for continuous integration / continuous delivery of the right analysis at the right time.

Here we will show how two of 2 of 4 applications will be used and the legos needed to operate them.

The PSA allows a user to view all the stamps a user has acquired (or set of users) allowing them to recommend a best course of action for preventing fraud within the requirements of the round.

Here are a few examples of how considerations on how this will work in practice. This will only focus on the Gitcoin Grants use case.

Example 1 - A Program/Round Operator would like to “gate” access to voting in a QF/QV vote. An FC might recommend that they use some combination or score of stamps to gate their particular round.

Passport Scores are instance specific and are applied by the event operator. A passport score may be applied to a user when participating in a vote/round. They may apply a score when the user joins a community. How a score is used is always on the event operator side of the system. The ability to update or change a score is therefore irrelevant because the event operator can always choose to modify how they interpret an existing score provided by Gitcoin or anyone else.

Example 2 - A Program/Round operator would like to gate access to only users who have a passport without any stamp/scoring requirements. They instead wish to “weight” the users voice in the vote. The reason they would use Passport stamps for weighting rather than onchain wallet signals is because Passport provides a shared ETL layer for their community to verify, validate, and reproduce algorithmic policy decisions.

Example 3 - A Program/Round operator wouls like to hold the right to “squelch” (apply a 0 coefficient) to a user during or after the round based on behavior during the round.

Open Questions about Passport Scoring Application and how Gitcoin uses it

Here are a few examples of how a Fraud Consultant might use the wallet scoring application.

Example 1 - FDD/Gitcoin stamps a user with the results of Wallet Scoring Application outputs. (Referenced above in PSA questions section)

Example 2 - An event operator uses passport to gate, but still feels like their round may have been sybil attacked

Example 3 - An event operator wants their round to be open/inclusive without Passport gating and hires Gitcoin/FDD to dynamically monitor the round and use reactive sybil mitigaion techniques if needed.